Get the latest investment articles in your inbox. 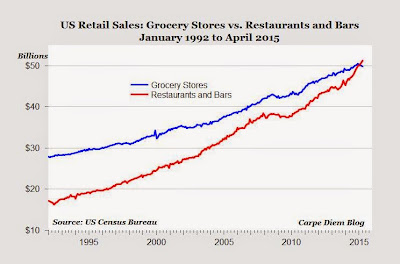 Based on today’s Census Bureau report on April retail sales, consumer spending at “Food Services and Drinking Places” (restaurants and bars, see red line) was greater than grocery store sales (blue line) in April for the third straight month, reversing a longstanding pattern of food spending and establishing a new US consumer milestone. As the chart above shows, the spending habits of Americans over the last three months represent the first time in US history that spending on food away from home by Americans has exceeded spending on food at home. In April consumers spent $51.25 billion on food and beverages at restaurants, which was almost $1.5 billion (and about 3%) more than $49.77 billion in grocery store sales for the month.